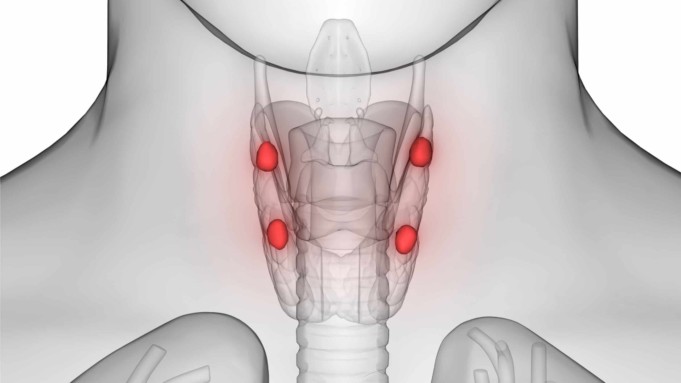 In humans there are four pea-sized parathyroid glands embedded in the thyroid gland, these organs all form a butterfly-shaped that consists of two lobes located at either side of the trachea (windpipe).

They are all located in the neck region of the human body just at the front below the larynx (Adam’s apple). Even though their names seem very similar, the parathyroid and thyroid gland have different functions.

The activity of the parathyroid glands is controlled by a simple negative feedback mechanism. Hyperactivity of the gland reduces the level of calcium in the blood and tissues due to calcium excretion in urine.

This can lead to a state of tetany in which muscles remain contracted, also the rate of excretion of phosphate is reduced and the level of phosphate ions in the blood rises.

Hyperparathyroidism is the condition that occurs when a parathyroid gland begins to excessively secrete parathyroid hormone, resulting in a rise in the levels of calcium in the bloodstream.

On the other hand, if the parathyroid hormonal secretion is lower than the normal/required levels, it will lead to low levels of calcium in the blood, this situation is called hypoparathyroidism.

In some cases, it is also possible that a benign tumor growth situated on a parathyroid gland makes it overactive and bigger in size. In very rare cases, hyperparathyroidism can be caused by parathyroid cancer.

Signs and Symptoms of Parathyroid Disease

The most common symptoms of hyperparathyroidism include:

If the condition is left unattended to, it can also lead to more severe symptoms such as:

Signs and Symptoms of hypoparathyroidism may include:

Signs and Symptoms of parathyroid cancer include weakness, feeling tired, and feeling of a lump in the neck, others may include:

Primary hyperparathyroidism occurs due to some problems with one or more of the four parathyroid glands. Conditions that can cause this include:

Secondary hyperparathyroidism is the result of other conditions that lower the calcium levels in the blood. This causes an overworking of the parathyroid gland in order to compensate for the calcium loss. These factors include:

Hypoparathyroidism, on the other hand, occurs when the parathyroid gland does not secrete enough parathyroid hormone. Factors that can cause this condition include:

Some possible causes of parathyroid cancer include:

Increased risk of primary hyperparathyroidism may occur if a person:

Factors that can increase the risk of developing hypoparathyroidism and parathyroid cancer include:

Once the diagnosis is completed, the doctor may counsel for more tests to check and cross-check any other possible causes. This helps the severity of the condition, tests usually include bone densitometry, Parathyroid scan, CAT scan, MRI scan, Angiogram, an ultrasound scan of the kidneys, and a 25-hydroxy-vitamin D blood test.

Hypoparathyroidism can result in various complications both reversible and irreversible such as:

Cramp-like spasms that can be prolonged and painful, occurs in the face, throat, and arms. When it occurs in the throat, it can interfere with breathing, creating a possible emergency.

Other complications may include:

Treatment options for parathyroid diseases include monitoring, medication, dietary supplements and surgery. Surgery has been discovered to be the most effective option to treat the disease. It entails removal of overactive parathyroid glands and can be performed either in a minimally invasive way or by a standard neck exploration.

Even though potential complications from this surgery are rare, some patients may experience damage to the nerves controlling their vocal cords after the surgery and it may affect speech. Also, once the surgery is successfully completed, the patients may need to take calcium and vitamin D medications so that their blood calcium levels remain normal.

On the other hand, if a patient experiences a mild primary parathyroid disease, he/she may only need proper monitoring. Monitoring usually consists of carrying out bone density measurements, physical exams, blood tests for calcium levels, and kidney function tests from time to time.